This is a guest post from Carlton Reid, executive editor of BikeBiz.com and the editor of BikeHub.co.uk, who commissioned and helped designed the great new Bike Hub app which uses our routing! Following on from his first guest post, he writes about version 2.0 of the BikeHub satnav & bikeshop-finder iPhone app. 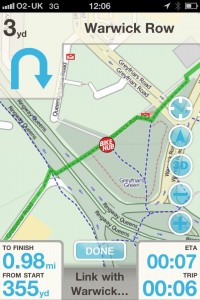 I'm a Mac addict so am conflicted when I here use a phrase popularised by Microsoft but it's true, I do eat my own dogfood.

I use the product I made. Or, more accurately, the product I commissioned. The Bike Hub app was coded by Tinderhouse of Kent and is given away free on iTunes thanks to the UK bicycle industry's levy, Bike Hub.

The app started life as a journey planner (and bike shop finder) but Version 2.0 turned it into a turn-by-turn satnav, with voice directions and vibration alerts.

It's all well and good me using the app in my home town of Newcastle but that's no real test, that's merely fun. The real test was to use it in a place I'm unfamiliar with. Earlier this week I was in Coventry with my folding bike, researching the hidden history of late 19th Century cyclists and their role in creating better roads. 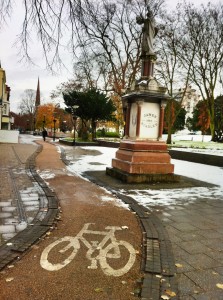 I had to get from out in the sticks through to the University of Warwick and then from there to a car showroom in Coventry before finally reaching the train station.

There's no handlebar holder for the iPhone 4 (yet, there's one due from Dahon any day now) so I was going to have to rely on the voice and vibrate alerts. With an earbud in one ear I could listen to the synthetic voice, and still be aware of noises around me. 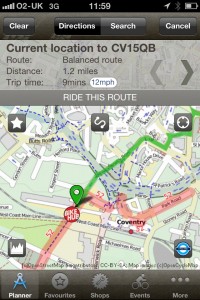 On roads, this worked fine. The satnav voice directed me to take lots of turns so I could stay away from Coventry's murderous dual carriageways. But when it came to being directed on bike paths, I had to stop and use visual guidance from the 3D map. When the app told me to go 'straight on' in my ear, I could see from the map that what it meant was divert to the cycle path. When cycle paths are well marked this system worked well but in Coventry town centre there are quite a few cycle underpasses to navigate and without looking at the 3D map I would have been flummoxed by using voice alone: there were too many un-named cut-throughs to navigate. Roads all have names; Sustrans' National Cycle Routes are listed by NCN#; but short cuts are denoted merely by 'link to'. Without a map to look at (and even with a map to look at) finding your way from a road via the app's 'link to' message can be confusing. 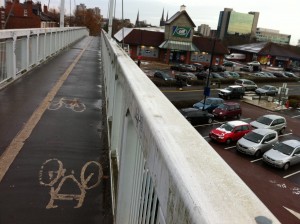 But when it works well, the satnav functionality works brilliantly. I was guided through short-cuts on the car-strangled campus of the University of Warwick and, once into Coventry, guided on Sustrans NCN routes, including bike bridges over nasty looking dual carriageways. Appropriately, I was guided past the statue of James Starley, one of the founding fathers of the UK bicycle industry, uncle of JK Starley, the designer of the Rover Safety bicycle, direct forerunner to the modern bicycle.

This status isn't listed on OpenStreetMap. I shall add it. 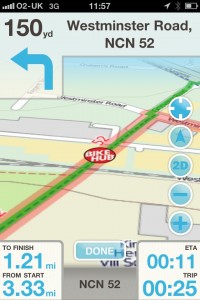