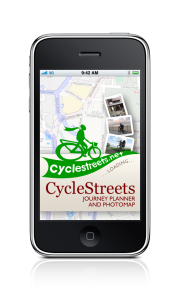 Created by cyclists, for cyclists, the free iPhone app is the nearest thing to a SatNav for cycling, enabling people to plan journeys anywhere in the UK with an innovative and quick “three-taps” interface. The app includes a full placefinder, postcode search and turn-by-turn directions.

Not just a journey planner, it has a campaigning edge too. The other half of the app is a Photomap, so that people can help address the legacy of poor cycling infrastructure around the UK, simply by snapping a picture and submitting it. Local Authorities and cycling bodies are signing up to use these pictures and prioritise areas for improvement, with Cambridge and soon London the first on board.

Three different routing modes in the journey planner are available: fastest (for more confident cyclists), quietest (for newer riders) and a balanced mode that aims to suit most users. Hills are no problem – the routing knows about how to avoid an uphill struggle and take advantage of downward slopes where practical alternatives are available.

People using other mobiles aren’t being left out – a small-screen web version of CycleStreets is being developed (m.cyclestreets.net) and an Android app (which powers many new phones coming out in the shops) is also being worked on. People can also go to www.cyclestreets.net via a standard web-browser.

CycleStreets for iPhone has been developed by Isomaly Ltd and has been made possible thanks to grants from the Rees Jeffreys Road Fund and Cycle Cambridge.

Despite this SatNav-like functionality, CycleStreets and the iPhone app have been developed not by a large company, but by what is a community-based group working on a not-for-profit basis to get more people cycling, more often.

“As cycling advocates and campaigners, one of the things we hear most often from people who don’t cycle is their fear of traffic. We’ve built CycleStreets to help them discover cycle-friendly routes and cut-throughs you never knew existed. CycleStreets aims to be like a knowledgeable cyclist but in the palm of your hand, wherever you are in the UK.”

“CycleStreets has been made possible by the brilliant OpenStreetMap project, dubbed the ‘Wikipedia of Maps’. Cyclists and others all around the UK collect and update street data that enables us then to create routing that thinks like a cyclist. Unlike traditional SatNav data, OpenStreetMap data is controlled by its user community. Anyone can get involved in OpenStreetMap, and over 300,000 people around the world are already doing so.”

CycleStreets routing is also being used within other cycling apps that include a route viewing amongst other features: it is already being used by the three leading iPhone apps for the London Cycle Hire Scheme, the BikeHub app and TrackMyJourney for Nokia/Java. New developers can apply for an API key.

These images may be used royalty-free and do not need to be credited.

Click on any image to get the highest-resolution version available.

Plan cycle-friendly routes from A to B anywhere in the UK!

4 thoughts to “Press release: Nearest thing to a ‘SatNav for Cycling’ launched for iPhone”