This is a guest post from Carlton Reid, executive editor of BikeBiz.com and the editor of BikeHub.co.uk. He writes here about the great new facilities in the Bike Hub app, which uses our routing and OpenStreetMap POIs feed.

The latest version of the Bike Hub cycle satnav app is 2.2; I’m currently testing 3.0, due for release soon. The new version will be packed with extra features, many of them suggested by app users.

I’m conflicted by all the additions. On the one hand I’ve always wanted to keep the app plain, simple, focussed. But users have said they want it to be feature rich. 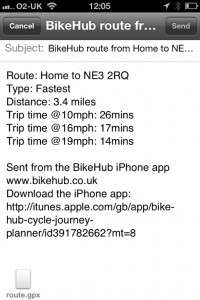 2.2 – released at the end of October – was enriched with a GPX download feature so plotted routes could be emailed to a user for later use, perhaps in a route visualisation programme, such as Google Earth.

I’ve used this feature a couple of times but it’s not what I’d consider the app’s core function: this core function is to be a cycle-specific satnav. We have also been asked to include other ‘performance monitoring’ features but there are many other apps out there that do this well.

It’s a fine balancing act: making the app feature-rich but not so complex that it becomes hard to use or worse, buggy.

The app is a standard satnav in that it routes from A to B. Version 3.0 adds what could be a world exclusive and that’s A to A routing. This makes the app into a touring tool: arrive at a railway station with your bike, fire up the app to guide you on a three hour trip sticky to country pubs and off you go.

Part of this functionality was added to 2.2. You can navigate to and from Points of Interest: ATMs, places of worship, parks, castles and many other PoIs.

Version 3.0 uses this growing database as a tour suggester. 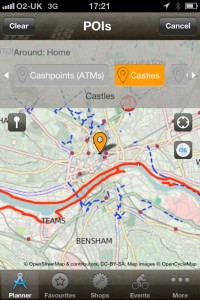 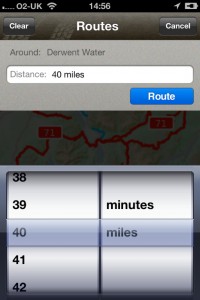 Also in version 3.0 – and a much requested feature – is dynamic route recalculation. Stray from the route and the app will suggest you make a u-turn. Stray a bit further and the app will create a new route, on the fly. This is standard on car satnavs, and it’s finally on Bike Hub version 3.0, thanks to app coding work from app developer Tinderhouse and routing tweaks by CycleStreets. 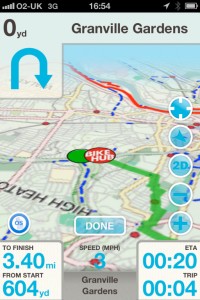 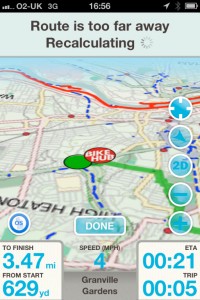 Version 3.0 also has tighter integration with CycleStreets, adding a box to input a CycleStreets journey number. This will be useful if you prefer to pre-plan your routes via desktop and then want to transfer the same route to your smartphone.

The most requested feature from users is added in version 3.0. This is map cacheing. Map tiles can be downloaded to a smartphone when in range of wifi or a good 3G signal. Users will still require a phone signal to call down the route from CycleStreets but maps – which can take a while to download in a poor signal area – can now be stored locally. (And deleted later, if wished). 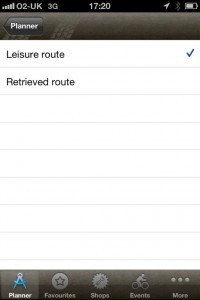 I know I’ll use this feature for cycle tours in Northumberland.

The app has evolved greatly since launch and will continue to evolve, thanks to funding from the Bike Hub levy fund. If you have other features you’d like to see added, get in touch. editor at bikehub.co.uk