Every year, the Department for Transport issues a massive data release, detailing every reported road collision in Great Britain, what vehicles were involved, and the outcome in injury terms. Known as STATS19, the data contains around 60 pieces of information for every collision – whether slight, serious or fatal. This is excellent work by the DfT who collate this.

We’ve plotted every collision, and made available the full details, on a map on our new Bikedata website.

The data for 2016 has just been released – we got it online within a few hours of its release.

The site is a beta – the two things we want to improve are removing the jumpiness of the icons, and dealing with the question of how to show large numbers of collisions when zoomed out – currently a limit is applied. Zooming in shows all.

Since the data was first made live, we’ve fixed a few issues. The latitude/longitude values in the original data were incorrect, so we’ve reprojected these from the northings/eastings values which are the original data. Some data in London was also misnumbered, which the DfT have corrected after we pointed this out. Our interface also was not filtering correctly for car occupants – now fixed.

For every collision, you can click to get full details – available openly without charge. 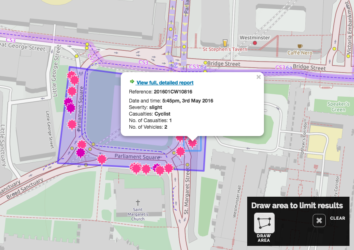 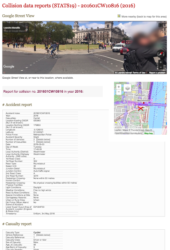 Behind every one of these is a human story:

Users of the site are finding that the visual display enables patterns to be spotted – such as the way that the typical British roundabout design fails cyclists:

This is incredible. Every driver-bike incident in the UK 2005-2016 mapped. Roundabouts are terrible for cyclists, turns out. Data at https://t.co/yRhStvpvIW pic.twitter.com/l8ktNe3dX6

as do junctions more generally:

Just checked my local area and cycling route. Every accident is at a junction or roundabout. Every single one without exception.

We’re now working to add new comparison facilities – we want to bring out the policy implications hidden in this data.

For instance, how do different Local Authorities compare? What happens when streets are upgraded to add safe, segregated infrastructure? How can we most easily demonstrate that allowing two-way cycling in one-way streets is a perfectly safe improvement.

We’ve also wanted for a long time to link these to newspaper reports and are considering methods to enable people to do that.