Since we released our iPhone app a few days ago, we’ve had a quite a number of enquiries about other platforms. The funding that helped pay for the iPhone app included in large part a sum to develop the routing API generally, so mobile apps on a whole range of platforms now are possible.

We have two initial priorities:

A small-screen version of the main site is being prepared, which will be available at m.cyclestreets.net.

We are aiming to ensure this is as compatible as possible with a whole range of devices, and we welcome offers of testing help. 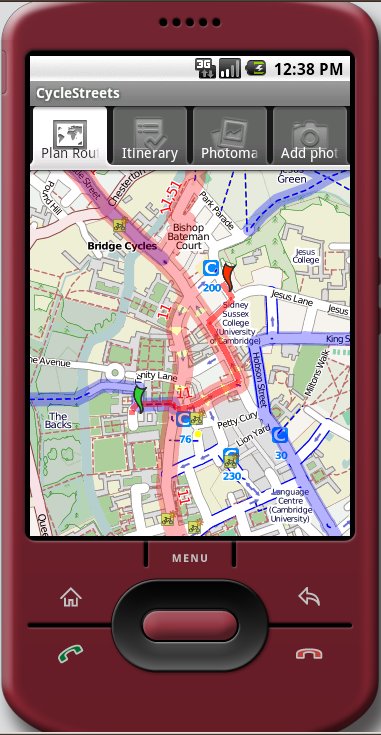 As previously mentioned on this blog, we have an Android app in the works, with the code on our GitHub repository. We don’t have a timescale yet, as it depends on volunteer help, but if you’re interested in helping out, do get in touch!

We’re particularly keen to ensure through the Android release that people can upload to the Photomap given the Photomap’s use for www.CyclingSorted.org and soon a similar portal for London.

One of the developers has sent us a screenshot of the work-in-progress. We hope to have more screenshots very soon.

We don’t have plans as yet to do a dedicated Nokia app, but if someone is interested in doing one for us, do get in touch.

However, the TrackMyJourney app for Java (runs on Nokia/Sony-Ericsson/Blackberry devices, though not Android) includes CycleStreets routing already amongst its many other features.

We have an API that developers can sign up for. We’re particularly keen to see the API used in Android apps now that the iOS arena is reasonably well-covered.

3 thoughts to “Mobile apps in the works: Android and others”