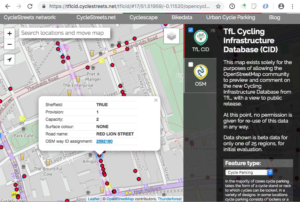 Transport for London (TfL) have created a new database of cycling infrastructure, containing 240,000 assets, covering all of Greater London. This is proposed to be released as open data.

“The world’s first Cycling Infrastructure Database will be the most comprehensive database of cycling infrastructure ever collected in London. Over the past 18 months, TfL has amassed data on every street in London, cataloguing almost 146,000 cycle parking spaces, 2,000 km of cycle lanes and more than 58,000 cycle signs and street markings. This information will be released as open data alongside a new digital map of cycle routes, will make journey planning and cycle parking much easier, as well as offering valuable information to TfL and the boroughs for planning future investment in cycling.”

TfL is keen to make this available to the OpenStreetMap community under a compatible open license, to ensure maximum use of the CID. TfL is also potentially willing to consider tool development to help facilitate sensitive merging in of this data. OpenStreetMap is the street data on which CycleStreets is built, so the better data available to OSM, the better our routing can become.

We’ve created a demonstrator map, for the purposes only of evaluation by the OSM community at this stage.

This demonstrator map contains only one of the 25 areas that have been surveyed.

We are specifically seeking comments on data quality and usefulness of this data from the OSM community. Initial analysis by CycleStreets is that the data is of excellent quality, and very suitable for conflation into OSM, to increase both comprehensiveness and metadata quality. 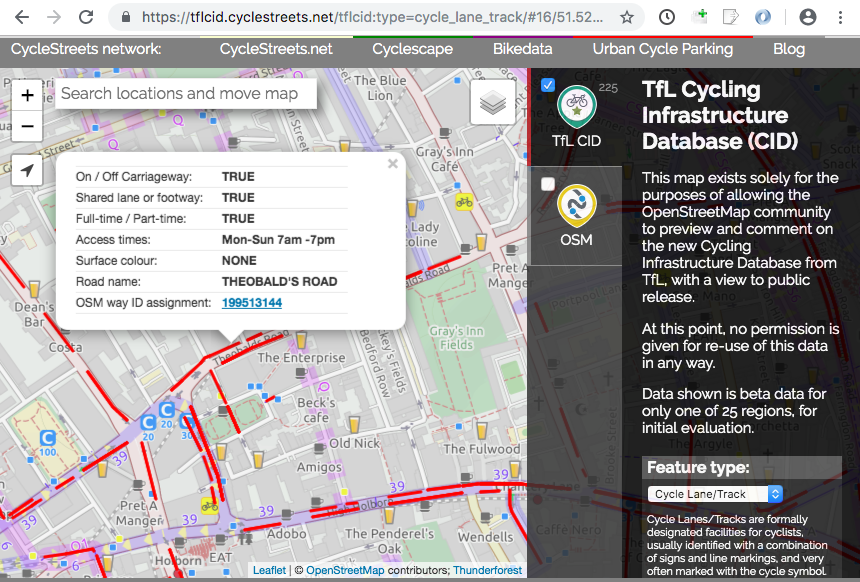 Usage notes: The controls on the right of the map allow the different feature types to be selected. The OSM layer (available at zoom level 19+) also provides a live feed from the OSM API, to enable quick comparisons. The two photos of each asset are in the process of being supplied; those already available and cleared in GDPR terms are included in the popup.

It is stressed that at this point, no permission is given for re-use of the data in any way, but TfL strongly intends to make this available in future. All 25 areas would be covered in the final data release, not merely the one shown currently in the demonstrator map.

Feedback is very strongly encouraged, as soon as possible.

Feedback and questions can also be e-mailed us.

We are happy to provide any clarifications, which will be added to this page, as a central repository of information about the project.