Back in July we wrote about our work to assist the DfT with the opening up of their cycling data, a dataset featured in the Telegraph this weekend. Over the summer, much progress has been made.

Andy Allan, who is perhaps best known for his excellent OpenCycleMap project, has been working for us to create a merging tool (within Potlatch 2) for helping to combine external datasets into OSM on a street-by-street basis. This tool will be useful not only for the DfT data that is becoming available soon, but also for other datasets.

The DfT data, which has mostly been collected by surveyors on bicycles, has the potential to significantly improve the quality of routing in some areas of England. We are well aware, however, that data collected by other agencies can undermine the work of OSM volunteers in the area if not handled sensitively, and so we've stressed that automated, bulk imports would not be accepted by the OSM community.

Instead, the approach taken is a method for OSM volunteers to inspect and merge the information on a street-by-street and attribute-by-attribute basis via the simplest and quickest means possible, using their local knowledge to enhance the end result.

Surface type, cycle lane widths and other data are amongst the attributes in the dataset, and these will shortly be supported in the routing engine.

The code for the beta release of the tool [included in this diff] has been reviewed and merged into the main Potlatch 2 codebase, and is already in the latest builds. We expect further changes to be made as we get feedback from initial testers.

OSMers should be able to try out the beta and the data soon as we have confirmation of the Open Government License for the data. Here are screenshots of the beta: 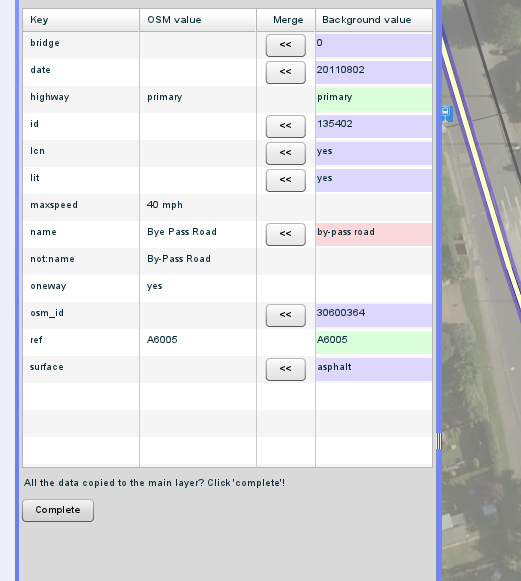 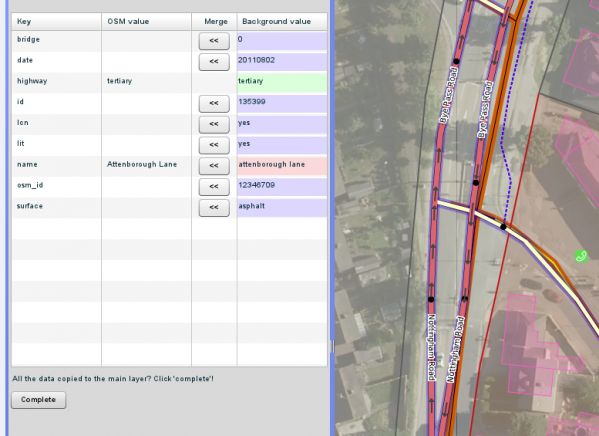 5 thoughts to “Merging tool for external data for OpenStreetMap”