We’ve rolled out an improvement to the journey planning engine which should mean it returns the route solutions about a third more quickly than before.

It’s still not as fast as we would like, but we have plans to make a major change this coming month or so which we believe will make a much bigger difference. With people starting to use our API, we’re even more aware of the need to maximise the planner’s performance, both in terms of speed and route quality.

The current speed-up is due to a set of changes we’ve made to the ‘scoping’ of the map data. When start/end points are determined, an elliptical scoping is done to obtain the likely area in which a set of routes will be found. We’ve implemented a more intelligent way of dealing with the scoping, resulting in a notable reduction of the amount of data taken in – leading to faster route-planning and less memory usage.

Our next improvement will be rolling out the wigglyness reduction work we’ve been doing, which is – for the second time(!) – nearing completion. We’ll blog about that soon.

Here is a planned route (number 121095), with the red (fastest) route highlighted*. Following this is a diagram showing the elliptical scope used – basically what’s within the green oval is the data available to the router.

*Yes, we know we need to make these maps bigger! – User interface designer needed – can you help? 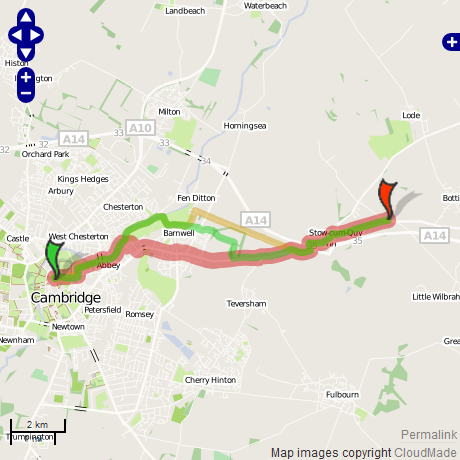 … the elliptical scope used for it:

Related Articles
Our talk at State of the Map 2019: Is the OSM data model creaking?
Turn cost factors – for safer and less wiggly routes