Urban cycle routes can often be very circuitous because they have to work around one-way systems, tunnel under major roads, use paths across parks and short links connecting residential areas.

For many years now, CycleStreets has included the cost of making each turn in the overall process of choosing a practical cycle route. The model used so far has been basic – counting 7 seconds for a left turn and 11 seconds for a right turn. That’s helped reduce their wigglyness, but we’ve long known of the limitations of applying that model equally to all junctions.

In particular, experienced cyclists know that right turns (in the UK case) from busy roads are to be avoided. So one of our objectives for routing quality is to avoid unnecessary right turns.

We’ve developed a more comprehensive set of criteria for assessing the cost of making a turn.

The new model takes into account the types of road on the approach to the junction, the likely traffic volumes, the right of way, turn angles, speeds and gradients.

We’ve built tools to help us assess the impact of these new costs on route choice and when ready we shall be rolling out this new model into the live routes suggested by CycleStreets.

This blog post gives a brief overview of the model.

The best cycle route between any two points is the one with the minimum total cost.

Because the total cost measure includes the cost of turning at each junction, the routes produced are already likely to contain fewer turns than they would otherwise.

As mentioned in the introduction, the cost model in use is a simple one that is applied equally to all junctions.

Where the turn is bear left or right then the slow down model applies, but when there’s a sharper turn, the stop model applies with bigger delays.

But that’s it, and that is currently applied to all junctions regardless of the type of roads involved.

The new model takes into account the road types at a junction.

For example, at a junction between residential roads where there is not much motor traffic it is safe to assume that in general the cyclist will not have to come to a full stop to make any kind of turn and that they can maintain their momentum. This means that those types of junction will have little impact on the journey cost.

Making good estimates of the waiting time for turns between different types of road will improve the quality of the recommended fastest routes.

By using a related measure, right turns onto busy roads (in the UK case) can be avoided when considering the quietest route. 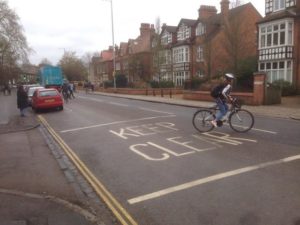 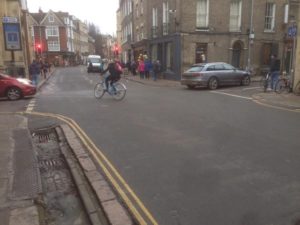 Junctions can make routes complicated, but what does help is good sign-posting. Routes that are clearly marked are usually helpful to most cyclists passing through an area.

Where a junction is on a marked cycle route, the cost factor can be made very low for sticking on the route and punitive for leaving it. The result of such a scoring scheme would be ‘sticky’ routes.

A significant part of this work has been modification of the A* algorithm to enable direction-specific node delays. This has been running stably now for some time. The key issue remains tuning this to give realistic values for each junction scenario.

The new model for applying turn costs at junctions takes into account a wide range of factors. Current versions of CycleStreets routing are building these factors into the model, but they are not yet being used in live routing.

We’re at the stage now of creating a series of tests to ensure a smooth transition to this new model as we finalise the calibration of the new cost factors.

We are grateful for funding which has enabled us to undertake the research and development in this area.