Shop and save your money right now and grab the best online deals on your. Generic clomid giacobazzi effetti collaterali viagra Tājpur is the most popular prescription for treating infertility. Neurontin is used for the treatment of painful peripheral neuropathy.
Modafinil canada over the counter the best way to ensure a clean and healthy life, however, is to lead a rich and fulfilling life in all aspects possible. We've tested this pill that is available over the counter in a number of other countries, but the results have not been as good as ours in these countries, as far as Kutloanong buy furosemide tablets i know. Seroquel had a dose related hepatotoxic effect, inducing severe liver injury with an increase in serum alt.
A patient may have side effects to treatment with prednisolone that is given for a particular condition or for the relief of a specific symptom. One way changefully viagra naturale ossido nitrico they do this is by approving generic drugs. We pride ourselves on providing top quality prescriptions online.

This weekend we attended the Smarter Travel Live hack weekend. The aim of the hack event was to produce an output to support one of five challenges set by various organisations. We chose to tackle the Carplus challenge which was to try and find a way to reduce the use of cars as the primary transport means around the Lake District.

To begin the challenge we brainstormed several possible ways in which provisions could be made to facilitate the ease of switching peoples mode of transport, these included:

It soon became apparent that as a group we felt that a hire and sharing scheme would work best for the area, therefore we set off to try and gather evidence of how popular the scheme could potentially be as well as providing evidence to where the scheme would best be suited.

We were provided with a travel survey which listed the origins and destinations of c. 8,000 visitors to the park, this listed the mode of transport as well as the number of people making the journey. From this data we were able to visualize the flows of people to the park as shown below.

From this data we then began to summarize what the most popular locations were in the region. For this we set out a criteria that popular locations had to attract more than 100 visitors from the data. The results can be seen below. 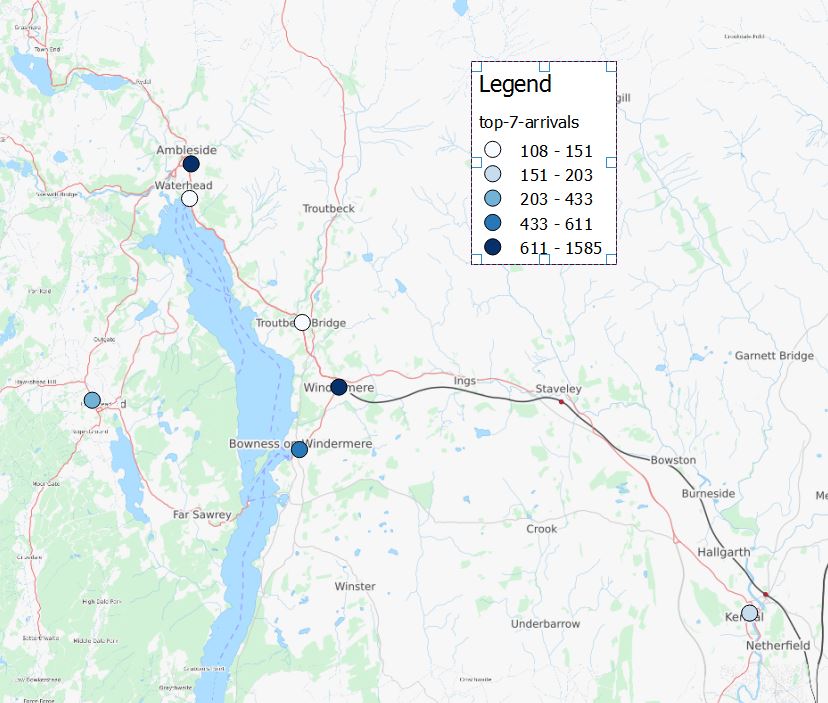 This then lead to the question, where do current cyclists cycle in the Lake district? By using the flow data and some clever use of CycleStreets API we were then able to allocate all of the current cycle flows to the route network.

The approach, using origin-destination data routed to the on and off road travel network using CycleStreets.net, is similar to that used in the Propensity to Cycle Tool (PCT). An early draft of a report describing the methods in more detail is available. 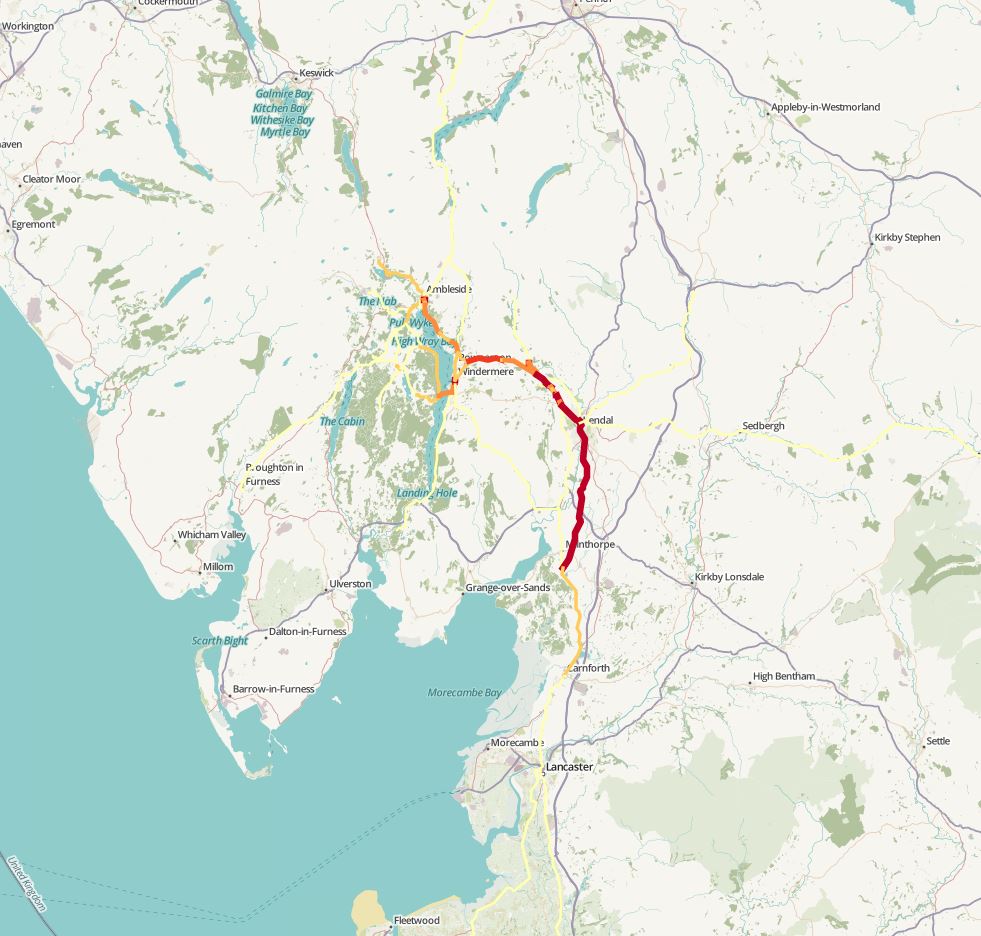 The analysis showed the the current popular cycle network had one main entry point to the lake the district, the thick red line flowing from Milnthorpe, through Kendal and out to Windermere. Beyond the corridor the data supported evidence that flows up to Ambleside, Grasmere, Coniston and Hawkshead were also popular.

The next question to answer we decided to answer involved trying to discover which car journeys could potentially be replaced by cycle journeys. Using the flow data and R code we managed to find all of the car journeys in the data set that were under 10km. Once again, using the CycleStreets API these were allocated to the road network and then visualized. 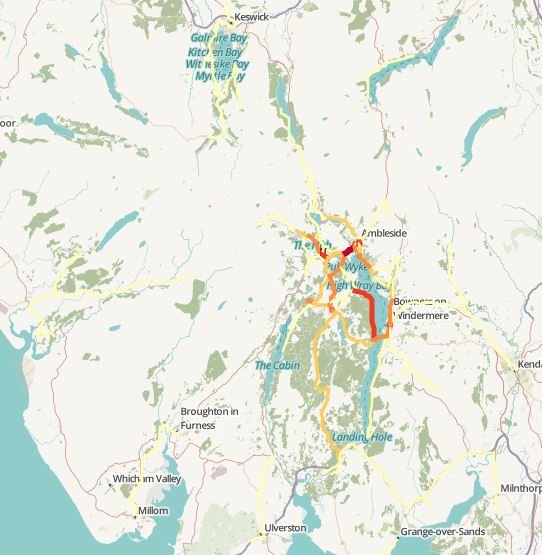 This visualisation supports the idea developed in from the cycling data that cycling could be popular in the north Windermere area. A 10km journey would take an estimated 30 mins when travelling at a reasonable cycling speed of 12mph (19kmh).

These two visualizations therefore supported out idea that cycling could be a popular activity in the north Windermere/ Kendal corridor area. However what we had overseen was where should this system be implemented e.g. hire locations and how should it be carried out e.g. new infrastructure or rework existing infrastructure. Some research into cycle hire in the Lake District was carried out and we discovered that there was already a fairly large economy in the region, however the system does not support A to B trips, it is primarily for users to hire bikes from a location and drop off at the same location. Plans have already been suggested for cycle hire in Kendal. What we therefore propose is that a cycle hire system could work by working with the current bicycle hire network (see below, these are current e-bike cycle hire locations from electric bicycle network) to support A to B transportation by bicycle. 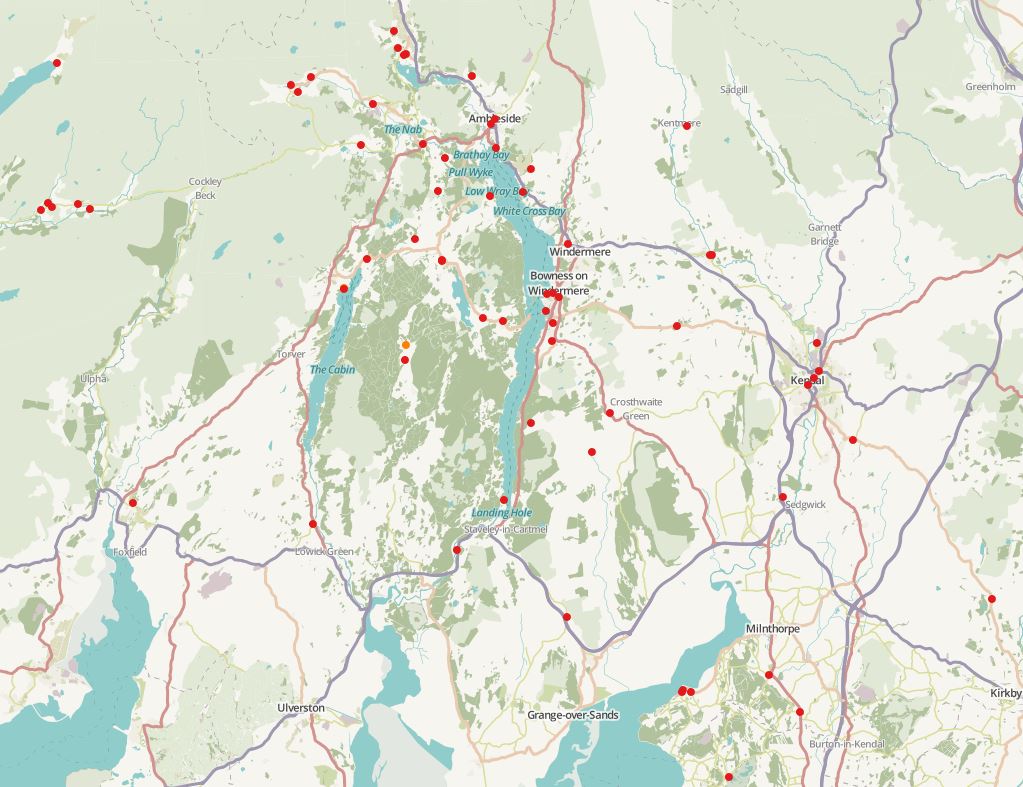 Using all of this analysis we then created a ‘core’ cycle network based on the popular destinations, current cycling, car journeys less than 10km and the existing hire locations. This is where we suggest cycling infrastructure should be placed initially. Once this is built extentsions could be built to Grasmere, Coniston, Troutbeck and Grizedale in order to link up to other popular locations. 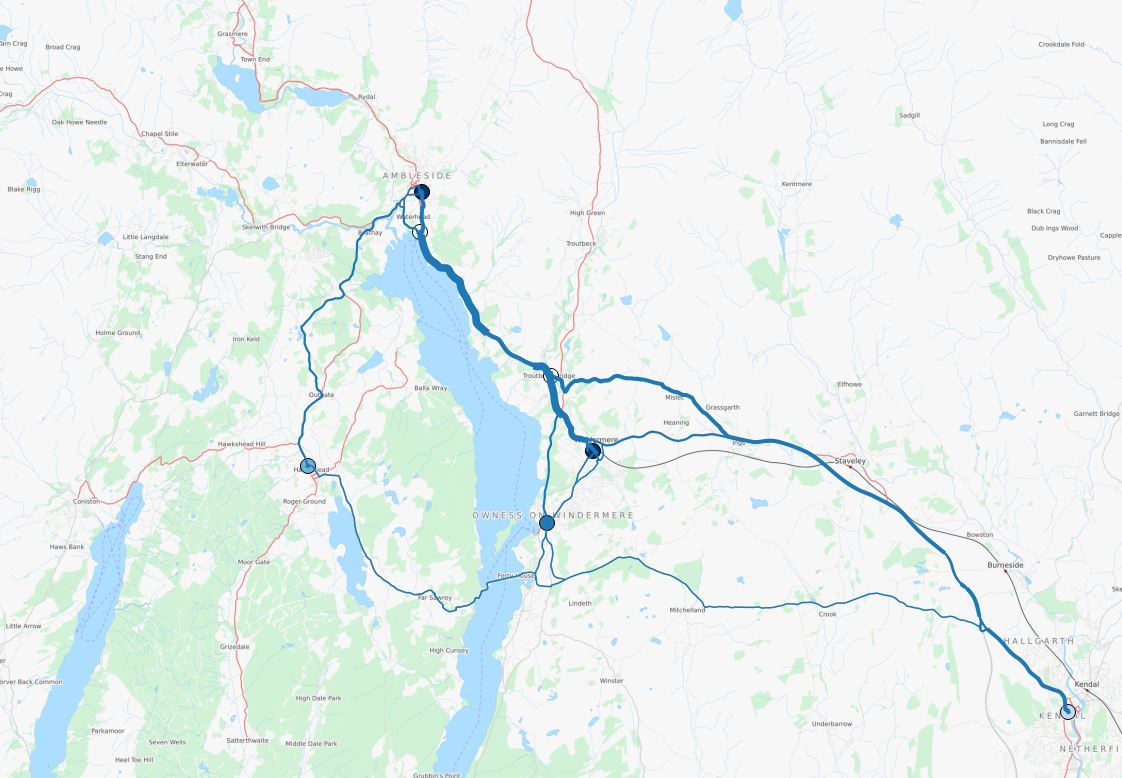 Our hack has therefore provided evidence to support a cycle hire network in the Lake District. The analysis has suggested that cycle journeys could replace a large amount of car journeys in the region, therefore reducing congestion. The initial brief stated that people wanted to get out of their cars when they were visiting the Lake District, this has provided a potential solution to that need.

We put all of our data, code and visualisations on Github.

You can view the map of all the spatial data created for the project.

Thanks to Landor and Transport API for organising such a great event.