We’re helping get Cycling Sorted, thanks to a new site we’ve created for Cambridgeshire County Council which has recently been launched!

Cycling Sorted is a project run by the Cycle Cambridge team at Cambridgeshire County Council to find out where you would like to make improvements to cycling facilities in Cambridge and the surrounding villages, in terms of new cycle parking and removing on-route obstructions.

How does it work? 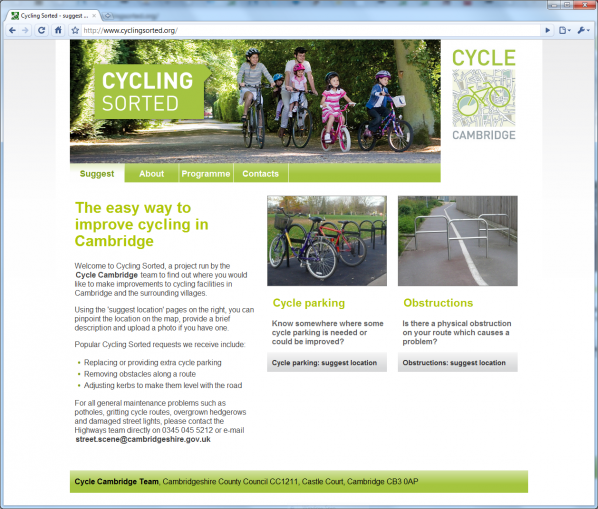 The site allows members of the public (including cycle campaigners) to:

While not everything requested can realistically be done, it’s an easy way to collect and prioritise the information from the people who know the area best – you!

Photos that have already been added to the CycleStreets Photomap will have been picked up, so there’s no need to re-enter those.

So if you have a suggestion for where cycle parking could be added, or would like obstructions removed, go and help get Cycling Sorted, at www.cyclingsorted.org to let Cambridgeshire County Council know!

There are three key differences with Cycling Sorted compared to other great initiatives like FixMyStreet and Fill That Hole:

There is a backend prioritisation system to which the Local Authority has access. 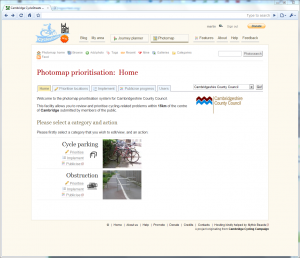 This part of the system enables prioritisation of each area by scoring and adding a note:

Prioritisation is worked through in submission order or by browsing a map and clicking on a button to edit all the suggestions in the area: 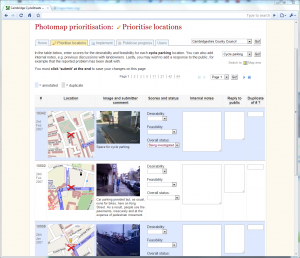 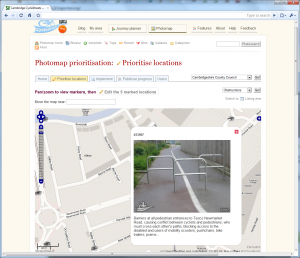 For instance, a city centre area which is desperately short of cycle parking might get 9/10 for desirability, but 2/10 for feasibility due to lack of space (realistically). Thus its score would be 18. By contrast, an area outside a row of shops on, say, Hills Road in Cambridge (a reasonably wide road with lots of shops) is fairly desirable (perhaps 8/10) as well as very achievable due to the wider pavements and side-roads (8/10). So in this hypothetical example, it would get a score of 64.

There is then a screen where the scored locations are listed in order (highest score first, i.e. most desirable and achievable), and these are then worked through for political approval and commissioning with contractors.

How about other areas of the country?

If your Local Authority would also be interested in a similar site for asking the public for locations needing improvement, and a way to prioritise these, do get in touch with us. We are keen to take on work to generalise the system for other areas.

PS We’re also working on a project on a similar theme for London … more news soon!